We, as members of Our Lady of Good Counsel Church, Strive to be witnesses to the good news of Jesus Christ by Proclaiming our faith, Educating ourselves and our children, Sharing our persons, resources, and gifts in the care and service of one another. We are called to foster an environment of hospitality in accordance with the Spirituality of St. Francis de Sales. 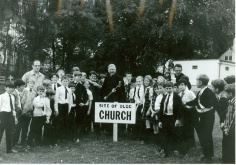 Originally, all of the widespread area of OLGC was a part of St. James Parish in Falls Church. As St. James became overcrowded, His Excellency Bishop Peter L. Ireton of Richmond established a new parish for the Vienna-Pimmit Hills area which would be located on 23 acres in Vienna that the Diocese had previously purchased. Our Lady of Good Counsel Parish began in November 1955 with 750 families and the Reverend Albert P. Campbell, a diocesan priest, as pastor. The first Masses were held in the Dunn Loring Firehouse. Soon after, a chapel and parish center was built on the second floor of Frank Gadell's Food Locker. 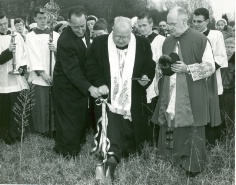 After Father Campbell became too ill to continue as pastor, Bishop Ireton asked the Oblates of St. Francis de Sales to assume the administration of the parish. On September 1, 1956, Reverend Joseph C. Toy, O.S.F.S., was named pastor.  On Sunday, September 1, 1957, the Chapel (the former gym and present multimedia center of Our Lady of Good Counsel School), a school facility with eight classrooms to accommodate children to the sixth grade, and a temporary Rectory, were dedicated.

The following year, the Frink house on one acre of land was purchased for a priests' residence, replacing the temporary facilities located in the back of the school. The Frink house, which was constructed in 1835, was owned by Mrs. Ada Frink, the founder and first president of the Altar and Rosary Society (later known as The Women of OLGC). In 1958, eight more classrooms and the Counsel Room (cafeteria) were added to the school facility as well as a convent to house the Sisters of St. Joseph who taught there. 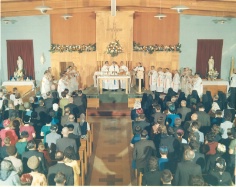 In August of 1963, Father Raymond McKone, O.S.F.S., succeeded Father Toy as pastor. Just ten months later, Father Edmond P. McCarthy, O.S.F.S., was named pastor. On May 25, 1965, His Excellency Bishop John J. Russell declared that approximately 750 OLGC families (about half the size of the parish at that time), along with two other parishes, would form the new parish of St. Mark, located on Vale Road on the west side of Vienna. Fr. McCarthy continued to lead OLGC until his death in 1968. In January 1969, Father Edward J. Corcoran, O.S.F.S., came to assume the pastorate of Our Lady of Good Counsel.

Under Father Corcoran's leadership, a new church was built and dedicated on March 10, 1973. A separate 3-bell tower rises in front of the church to peal its welcome to arriving worshipers. The largest bell weighing 1,480 pounds is inscribed "Our Lady of Good Counsel Church, Vienna, Virginia, November 1972, 'Henceforth all generations shall call me blessed.'" 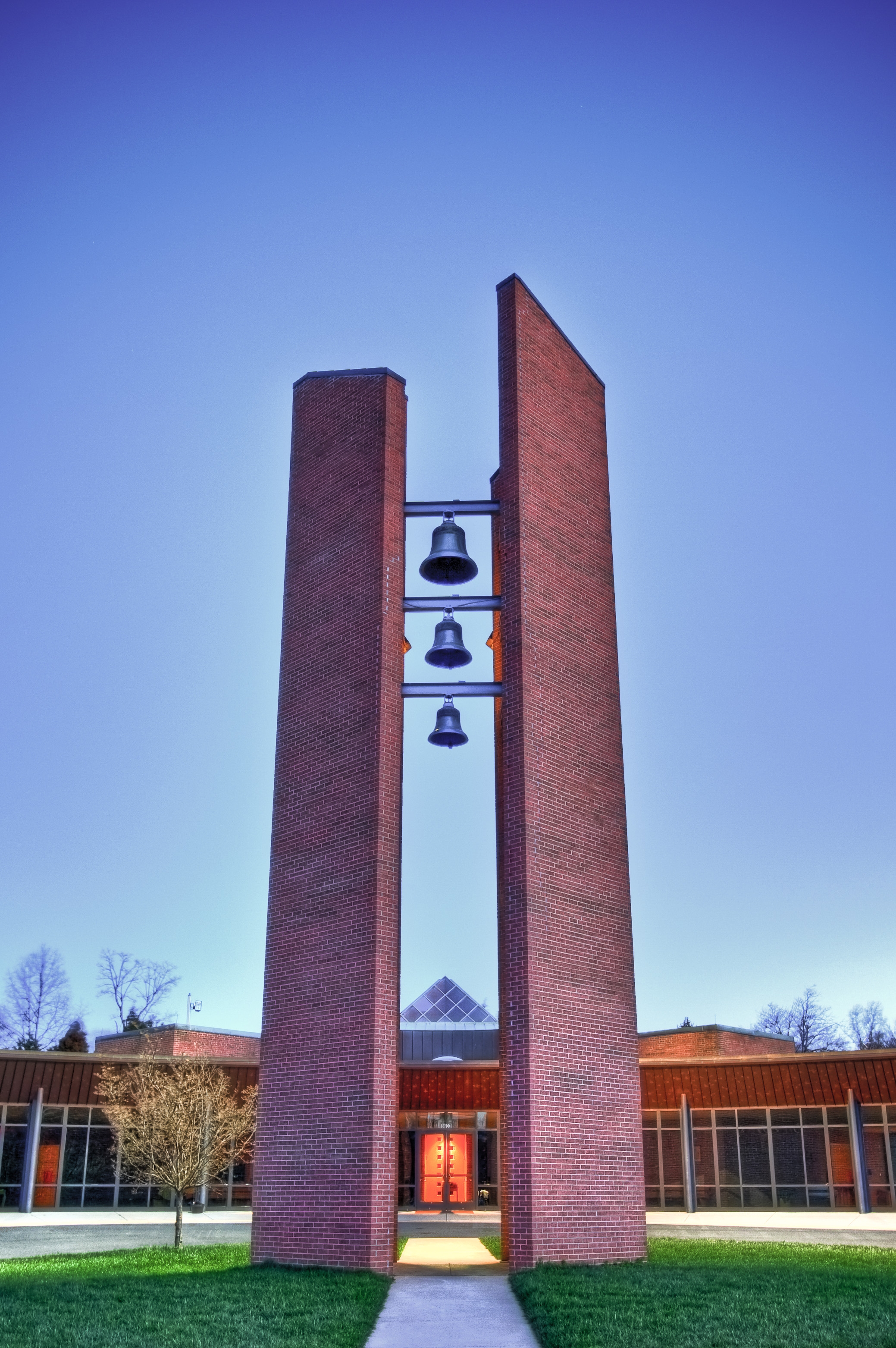 The medium bell, weighing 704 pounds, says: "Live + Jesus - 'I am come that they may have life and have it more abundantly.'" The smallest weighs 400 pounds and reads "St. Joseph - St. Jude - St. Francis de Sales - Pray for us." In 1977, the old Frink house was torn down and a new Rectory and Parish Administration Building was erected.

In June of 1985, Reverend John T. Gavin, O.S.F.S., was assigned to Our Lady of Good Counsel as pastor. Under his direction the parish was one of the first in the diocese to computerize its accounting and parish record keeping. In addition, he set up committees to begin to explore the future needs of the parish. This process was the groundwork for the ultimate approval of the parish to its major facility expansion which began in 2000.

In July of 1991, Reverend Francis W. Danella, O.S.F.S., was named pastor and strengthened the consultative process by formalizing the role of the Pastoral and Finance Councils. He also established a formalized budget process. Fr. Danella expanded the parish ministries, placing a strong emphasis on liturgy and the Spirituality of St. Francis de Sales. In addition, under his guidance an Annual Parish Auction and Dinner was begun to help fund facility repair and improvements.

In September 1996, Reverend John M. O'Neill, O.S.F.S., was installed as Pastor. Under his direction, the parish made major repairs and improvements to the school including the construction of a new science lab. He implemented a study of parish needs with the result that the parish began a Capital Campaign to fund major improvements and additions to parish facilities. As part of this initiative, the parish began to make additional improvements to the school including a new library and computer classroom, a new regulation-sized gym (one of the best in the Diocese), a chapel, and a multipurpose facility with lower classrooms. 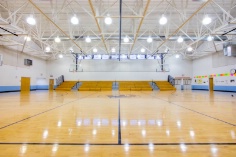 In July 2004, Reverend William J. Metzger, O.S.F.S., became pastor and oversaw the completion of the new facilities, as well as the naming of the chapel as Sacred Heart Chapel, the multipurpose building as De Sales Hall, the gym in honor of the founder of the Oblates of St. Francis de Sales, Blessed Louis Brisson, and the renaming of the former Parish Center (now the St. Joseph’s Center) in honor of the Sisters of St. Joseph who staffed Our Lady of Good Counsel School from its inception in 1955 until 1987.

Building on the work of Fr. Danella and Fr. O’Neill, Fr. Metzger strengthened the parish’s identity with the charism of the Spirituality of St. Francis de Sales and St. Jane de Chantal, expanded worship opportunities for the school, and expanded the Christian Formation program to become focused on Lifelong Christian Formation including deeper integration with the ongoing catechesis in the school. He increased the scope of the youth ministry program to include young adults and Jr. High and the High School Workcamp, which increased the service opportunities for the Confirmation candidates. Fr. Metzger also increased the support of those in need by adding a monthly food drive to stock the local food bank, increased the support for our Society of At. Vincent de Paul and the Shepherd’s Center, as well as supported a Pro-Life program to enable a local Pregnancy Health Center to become a licensed medical clinic which will provide ultrasound services to clients. Following the increase in facilities the parish, hosts a greater diversity of worship services, social events, and Diocesan meetings. 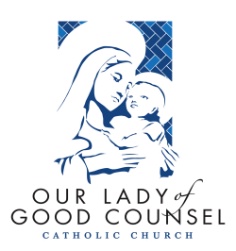 In May 2012, the Church & School unveiled the new Our Lady of Good Counsel logo image and re-designed websites. The image permeates with light and life, with the halo imagery being clean and pure showing the holiness of the Mother and Child. Mary is strong but caring, the Baby Christ looks affectionately into the eyes of His mother. The logo & websites bring continuity and unity to our community and help us remember that we always bring the Gospel into a world that is ever moving into the future.

On September 25, 2016, His Excellency Bishop Paul S. Loverde installed Father Matthew J. Hillyard, O.S.F.S. as OLGC's new pastor. Previous Pastor Fr. William Metzger, O.S.F.S. stayed on as Parochial Vicar until he retired on July 1, 2018. Fr. Metzger said, "I will be aging in place (aip), not retired in place (rip). I would like to thank all of the members of the parish for their prayers and support and friendship over the past 18 years. I will still be "moderately" active and so you will still see me around the parish celebrating the sacraments. It has been and still is a pleasure to serve you and pray with you. Please keep me in your prayers." 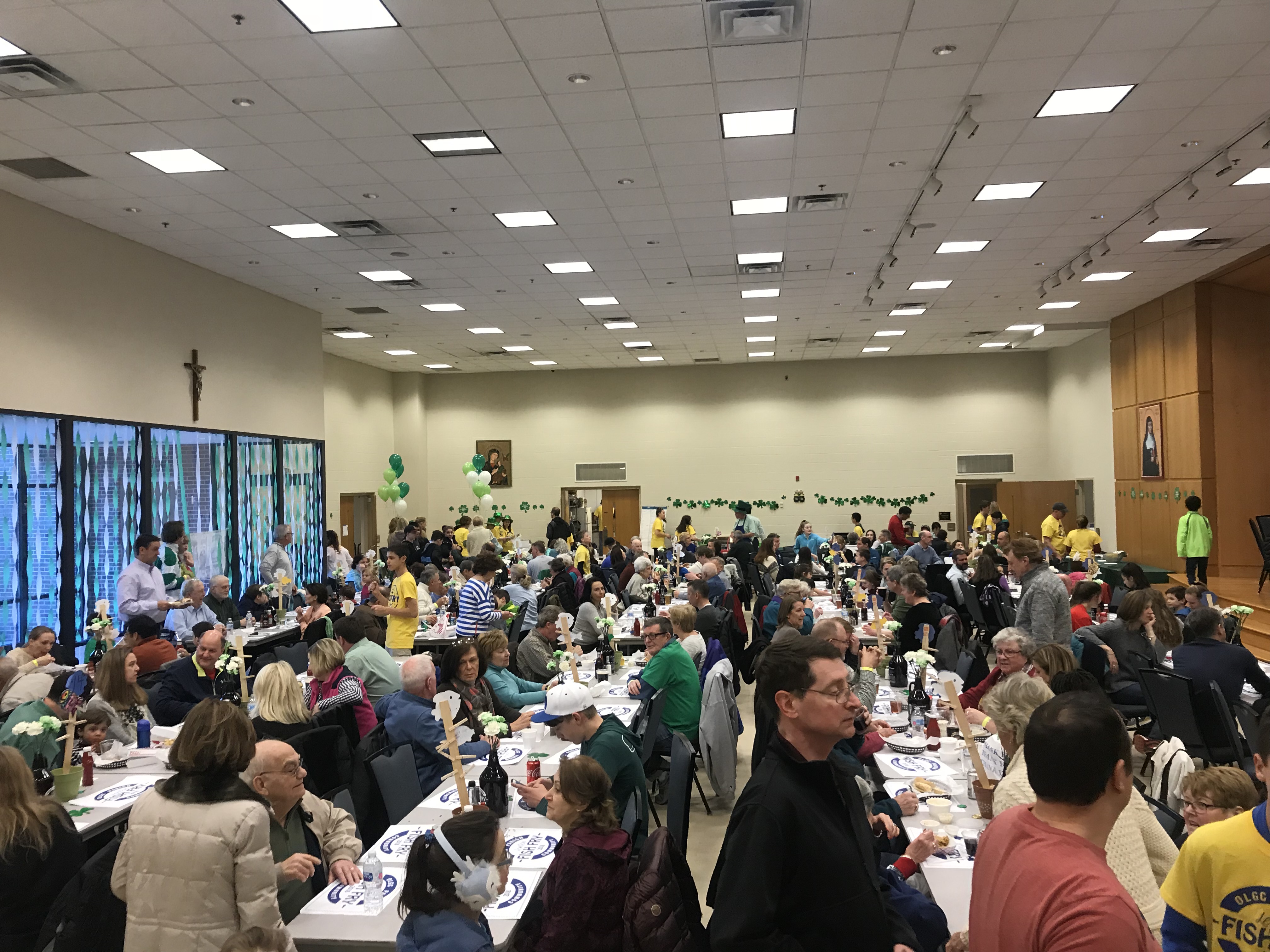 Fr. Matt sought the guidance of the Pastoral and Finance Councils to review the vision and values of OLGC. Five mission areas were created: Liturgy and Worship; Faith Formation; Fellowship; Outreach; and the School. Based on these areas the parish community was given the opportunity to provide feedback and ideas which helped create a 5 year Pastoral Plan to give direction to the future of OLGC. Many of these initiatives have brought the school and church communities together in fellowship and service, to include the Lenten Fish Frys, building Power Packs for Food for Others and service to The Lamb Center, to name a few. Enhancements to liturgy and worship included the painting of the church, new vestments and liturgical appointments, as well as securing new pianos, sanctuary furniture, and a new sound system.

During Fr. Matt’s tenure yearly themes are given as a focal point for church and school staff, students and parishioners to guide them to Live Jesus as a community and individually. He sends out weekly reflections to share his thoughts called “Fr. Matt’s Musings”. This new mobile responsive website was launched and social media platforms such as Facebook, Twitter and Instagram were enhanced and created to engage and communicate with the OLGC Community and beyond.

OLGC School celebrated 60 years during the 2017-2018 school year with many activities for the students and staff, such as participating in the Town of Vienna Annual Halloween parade, a visit by His Excellency Bishop Michael F. Burbidge, and sponsored the Town of Vienna Chillin’ on Church event. In August 2018, OLGC School started a preschool program for children 3-5 years old.

Throughout its history, Our Lady of Good Counsel Parish has consistently fostered the practical Spirituality of St. Francis De Sales, a spirituality directed specifically to those who are active in the world. This spirituality calls each person to "Live Jesus" in and through their own unique personality, utilizing their unique gifts within the context of their own family, parish, neighborhood, work environment, state, and nation. St. Francis says, "Be who you are and be that well," and again " The opportunity to do great things does not come very often, but at every moment we can do little acts with great love." We invite you to begin an exploration of this spirituality by visiting the De Sales Spirituality Center. 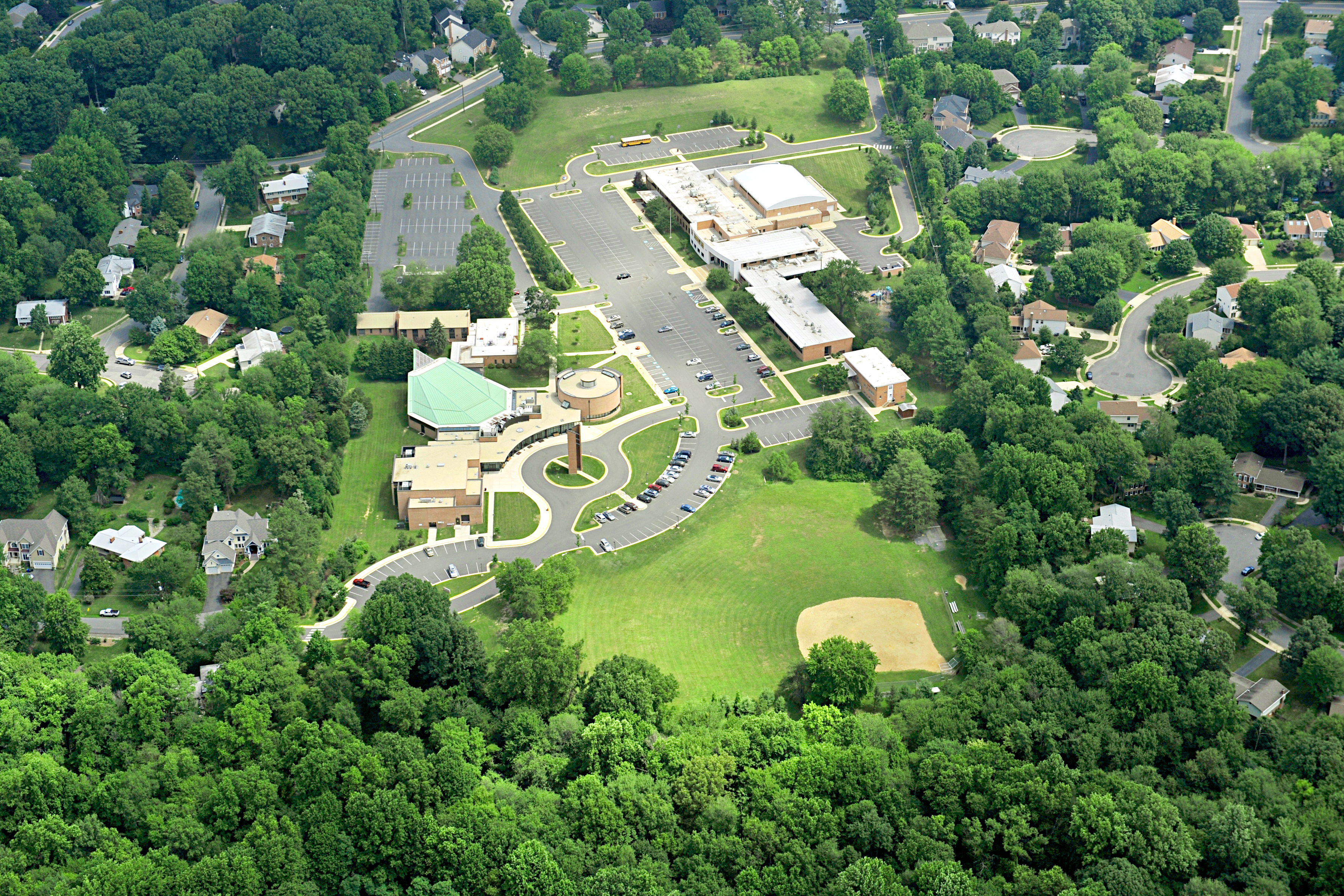