The primary objectives of the OLGC House league are instruction, sportsmanship, and fun. These objectives will be fulfilled in a positive Christian environment. .

The NVJCYO is made up of teams from various parishes in the Northern Virginia area.

A couple of weeks before NCAA March Madness sweeps the country, during the last week of February, there is a similar phenomenon at a parish in Vienna, Virginia. The parish is Our Lady of Good Counsel and they call it February Frenzy.

It is a double elimination tournament in OLGC’s 4th and 5th Grade House Basketball league. The stands are packed from Friday through Sunday, culminating with standing room only crowds at the girls’ and boys’ championship games on Monday Night. Family, friends, teachers, and former players and coaches all flock to the gym. The counsel room functions as a concession stand staffed by 5th graders raising money for the parish auction. The referees are OLGC high school parishioners who participated in the league when they were younger.

The thrill of victory and agony of defeat plays out each game with the players leaving it all on the floor. There are upsets, amazing performances, and unlikely heroes. Lifelong memories are made for players and their families. Technology now allows the live action to be seen while eating at the snack bar and to be streamed live to family and friends who cannot make it to the games. OLGC House League and its annual tournament are a truly unique and memorable experience.

While 36 parishes in the Arlington Diocese currently field CYO basketball teams, OLGC is the only one in the Diocese to have its own house league for 4th and 5th graders, after which the OLGC girls and boys “graduate” to compete with other parishes in the CYO starting in 6th grade. OLGC always fields some of the most competitive teams in the CYO and its teams have won numerous championships at all different levels and divisions. This is due in no small part to the opportunity the players have to play lots of competitive minutes and take on leadership roles in the OLGC House League. Veteran 5th graders help 4th graders develop as teammates. In addition, the OLGC House League fosters community as the 4th and 5th grade players’ families get to know each other over the course of the season in the OLGC bleachers.

History of the OLGC House League

In 1973, a new church was built at OLGC, and the old church was renovated into a small gym and classrooms. At that time, the OLGC school only went through 6th grade, and there was no local Catholic middle school. 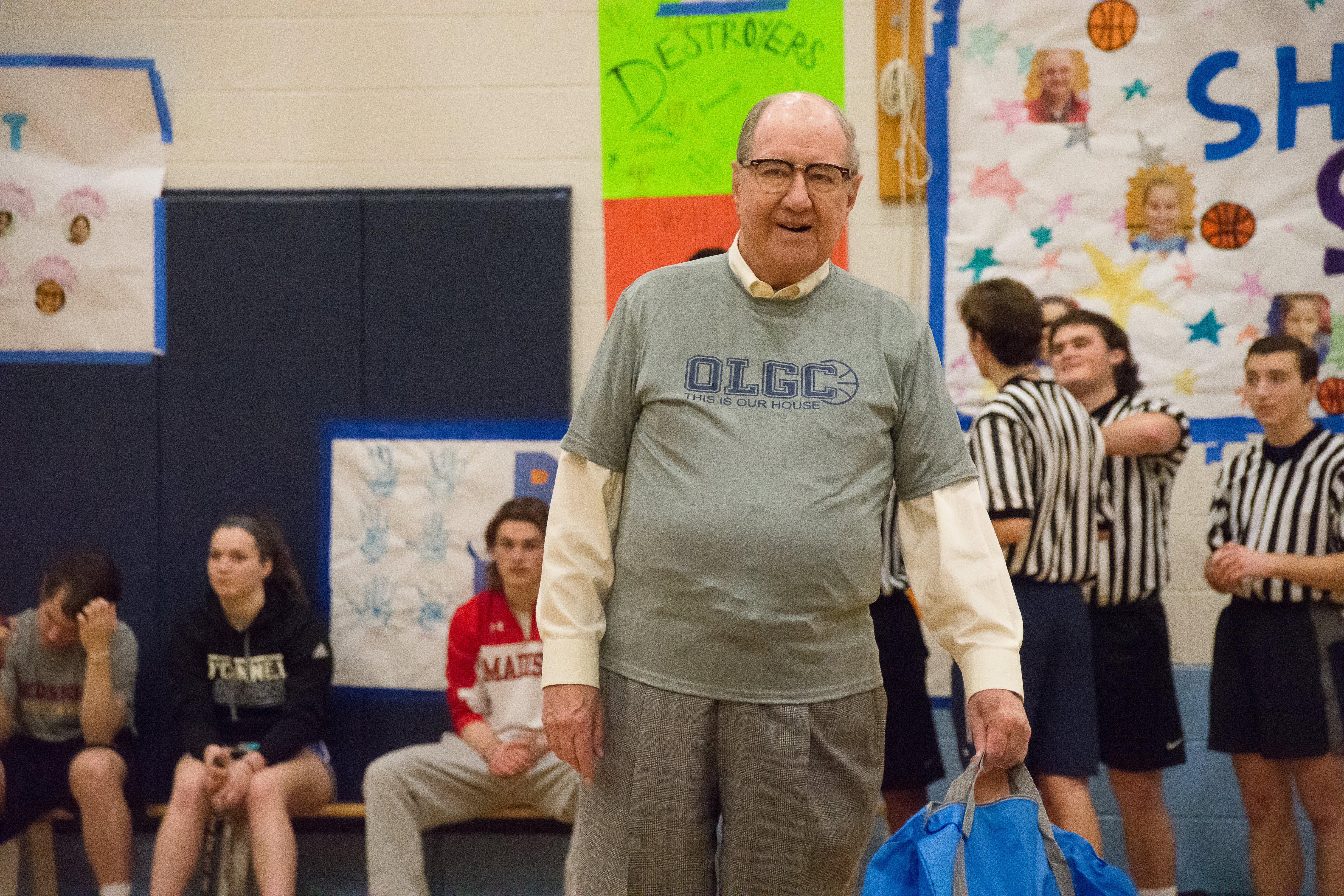 The pastor, Father Edward Corcoran, who had led the renovation, understood the importance of Catholic education, having come from a distinguished career as a teacher and principal at Northeast Catholic High School in Philadelphia. He appointed a committee to study the feasibility of having a seventh and eighth grade at OLGC and appointed John Brandt (pictured above) to chair that committee. John was a young attorney who had recently lost his wife Mary at the age of 30 and had two sons, Joe and Paul. Father Corcoran accepted the committee’s recommendations in full, and OLGC added a seventh and eighth grade in 1974.

Shortly thereafter, John asked Father Ed if he could start a house league basketball program at OLGC using the new gym. At the time, there was CYO basketball for 7th and 8th grade boys run by Ron Cobert and a 5th through 8th grade girls team by Mike (“Shoot the Ball”) Mussomeli and thereafter, Jim O’Donnell. However, there was nothing for the 5th and 6th grade boys. Father Corcoran embraced John’s idea, and the OLGC House League was born.

John relates that “after Fr. Ed gave us the ‘green light’ on the house league, and, because the girls in grades 5 -8 were playing CYO ball, we concentrated first on the boys in grades 5 and 6. In the Fall of 1976, we fielded four boys’ teams from the 5th and 6th grades with games starting at 6 -7 p.m. during the week. The four-team house league was successful with good coaching and referees were recruited from the coaches and assistant coaches; and from high-school aged parishioners. In the Fall of 1977 the house league expanded to include the 7th and 8th grades and we also began a 7th grade boys’ CYO team with the better 7th grade players coached by Brandt. The girls’ and boys’ CYO teams (both of which drew from the school and from CCF students) enjoyed remarkable success in the Diocesan League.”

The league was a huge success and had a great side benefit of bringing together families as they watched their kids play in the new gym. Ed Morahan moved to the parish and took over the Commissioner role from John. Ed introduced the idea of paying high school parishioners to referee the games. Ed explained that this approach let the high schoolers earn a few bucks and get good experience, and it also cut down on fan complaints and avoided stress on the parent volunteers. He lost some of the referees, including one of his own sons, to the CYO league, which paid more money.

Ed continued as Commissioner even after his boys aged out, and he was followed by Gary Sheehan, who served as commissioner for nine years. Gary passed away in 2009. His wife, Diane, passes on that the House League was “very important” to Gary and that “he would be thrilled to know it is still going strong.” Gary led an effort to replace the worn linoleum floor of the gym with wood believing it was better for the kids. Gary’s daughter and some of her classmates were itching to play House League as well like the boys, and Gary and Paul Prisinzano launched the OLGC girls’ house league in 1986-1987 for 5th and 6th grade girls and Paul’s 4th grade daughter, Debbie.

The two commissioner approach allowed the work to be shared. Paul notes that rather than having evaluations and a draft, he decided to organize the girls’ teams by height. Gary Sheehan’s daughter, Meghan and her friend, Katie Broadnik, ended up playing together on a team coached by Gary and Tim Broadnik. It was the beginning of a dynamic duo as the two went on to play hoops together at O’Connell and then at Marquette and Duke respectively.

Gary passed the torch to Bill Hanelly who passed it on to Kevin McCarthy, who led the House League for three years before handing off to fellow Fightin’ Irish alum Lee Manfred. Lee teamed with Keith Sullivan to run the league for four years. During this period, Lee and Keith introduced the double elimination, single weekend tournament in 1999 that continues today. It was patterned after tournaments run in upstate New York by Lee’s Dad.

Lee’s wife, Susan, came up with the idea of selling concessions as a 5th grade auction project, selling pizza generously donated by the Castro family. Joe Cowden then took the reins for three years including adroitly negotiating an entire season and tournament at Kilmer Center during the more recent school renovation and new gym construction. Joe and Lee, who was then running the CYO program, organized a “Coach’s Game” one year that was well attended and lots of fun until Joe, who was training to climb a mountain and in the best shape of all of the coaches, ruptured his Achilles.

Joe handed the Commissioner role off to Jim Briody who led the inaugural season at the new gym and instituted the concept of announcing the players during the tournament. Jim passed the reins off to Duane Knauf and Lisa Nihill, and they made more improvements such as obtaining a master list of conflicts and moving the championship games to Monday night to allow everybody to get a good night’s sleep (and emotions to cool down) before the title games. They also adopted a rule mandating man to man defense for the first three weeks, zone for the next three, and any type of defense the final four games and tournament. This ensured that players on all of the teams learned both types of defense and the offensive approaches against each.

After four years, Lisa passed the job to Kevin O’Brien, and Duane and Kevin ran the league together for several years. During this period, they began setting up a video camera in the gym manned often by students, and the games were broadcast into the counsel room so fans could eat and watch.

After a six-year stint, Duane was followed by Mike Trivisonno. After Mike’s first year, Kevin also recruited Dave Shiells and the trio led the league with Russ Weaver then taking Mike’s spot. Around this time frame, the Salesian Spirit Award was introduced to recognize exceptional sportsmanship by a girl and boy from each league, and younger referees were assigned book and clock duty so more could be involved.

After Kevin graduated, Dave and Russ led the league until the 2017-18 season when Mike Francese took over for Russ and, under his and Dave’s leadership, the league continues to flourish, with Eric Andres set to step in for Dave and work with Mike next season.

The House League has become bigger over the years, but its essence and character remain very much intact. While the Commissioners have played an important role, the backbone of the league has been the hundreds of volunteer coaches who have given their time, energy, experience, and passion over the years to work and develop our youth and teach them about basketball, sportsmanship, teamwork, and the importance of doing your best in a community setting. In addition, its success is also a result of the many referees and referee coordinators who have stepped up to help the program and have accepted the challenge of officiating in a developmental league, striking the difficult balance where the skill and experience levels vary widely. The players and families have also embraced the OLGC House League with enthusiasm, energy and a cooperative positive attitude.

OLGC’s House League has been blessed by critical support throughout its existence from the Oblates at OLGC from Fr. Corcoran through Fr. Metzger and now Fr. Hillyard! 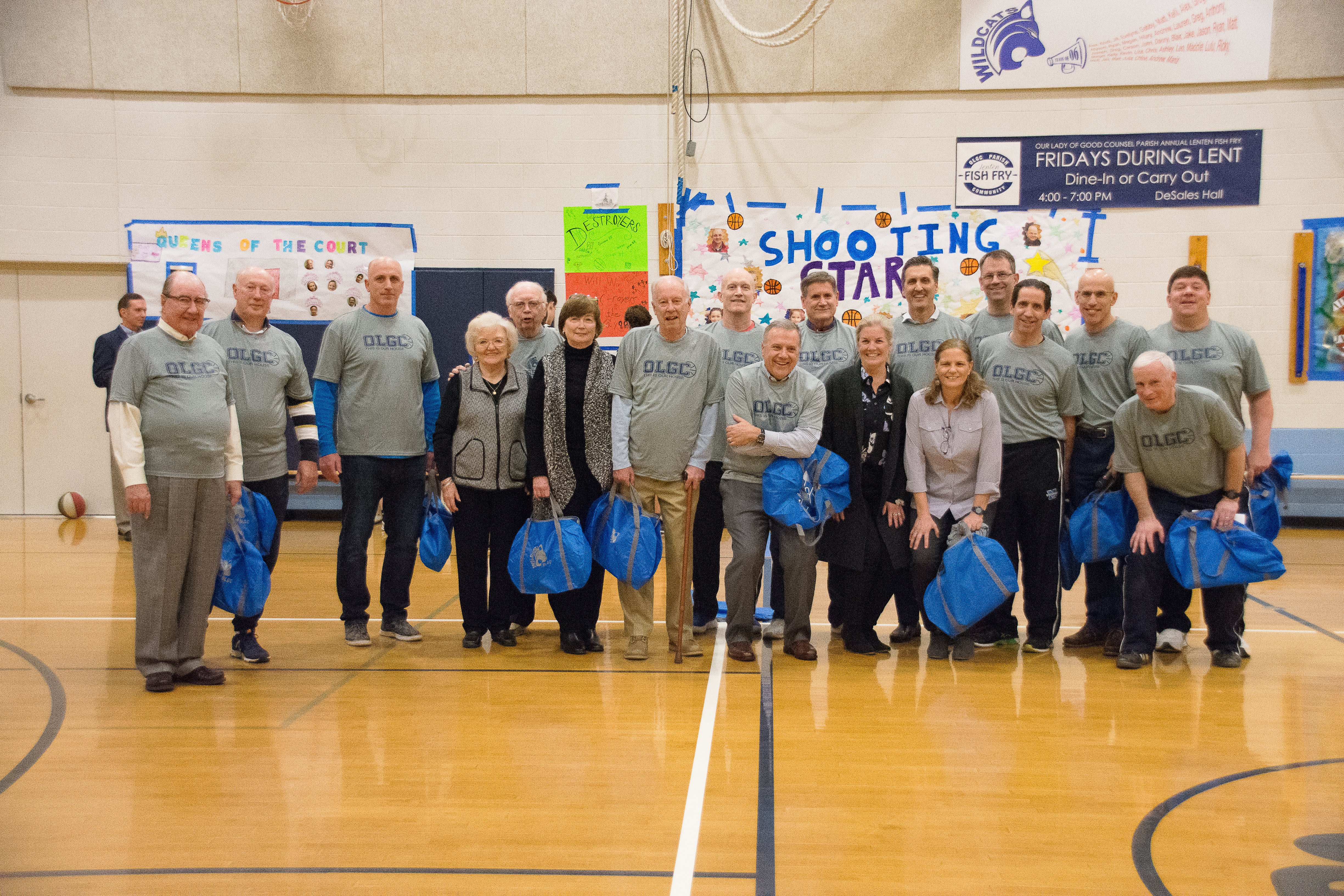 Parents and adults are encouraged to volunteer. All volunteers must complete the required background check and Virtus training session. Visit the Volunteering with Children webpage for more information. For more indepth information, please visit the Catholic Diocese of Arlington - Office of Child Protection

When registering for the first time, parents need to register first and then add children as family members.

Forms must be filled out: