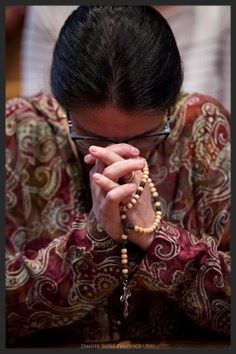 A Roman Catholic devotion is a gift (total or partial) of oneself, or one's activities to God. It is a willingness and desire to dedicate oneself to serve God, either in terms of prayers or in terms of a set of pious acts such as the adoration of God or the veneration of the saints or the Virgin Mary. Roman Catholic devotions are "external practices of piety" which are not part of the official liturgy of the Catholic Church but are part of the popular spiritual practices of Catholics. The Congregation for Divine Worship at the Vatican publishes a Directory of devotions and pious practices.

Devotions at OLGC - refer to monthly calendar for any changes